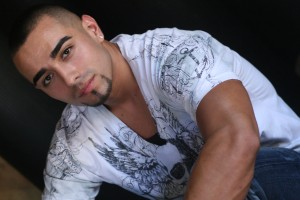 There’s just something about a woman and lifting weights that is SO DAMN SEXY! I have to admit, I was a bit skeptical about writing this blog. But, then again, I’m tired of hearing woman say “lifting weights will make me buff!” or “I don’t want to lift weights because I’ll look like a man!” Time and time again I hear this and the biggest reason for this portrayal is the magazines, internet, infomercials, hear say, ignorant people, lack of accurate information, our culture, etc. The many sources that have led to this portrayal of woman thinking that if they lift weights, then they’ll become buff, muscular, and look like a man has gotten out of hand. It’s these types of sources that drive woman away from strength training and it drives me nuts because there are so many positive side effects to strength training and there are a lot of woman out there missing out.

Among the many, many positive side effects of picking up some heavy metal and pounding the weights (which I will talk about in the latter part of this blog) is that it can boost your libido (sexual drive), and immensely. Feeling strong and looking strong is sexy. Everyone, man or woman, wants to look and FEEL great naked.  If you’ve never thought that picking up a barbell or man handling dumb bells in the gym could be fiercely sexy and empowering, maybe you should give it a try. Studies have shown that regular exercisers report a higher sex drive, possibly related to surges of testosterone that can occur immediately after resistance training like lifting heavy weights.  I’ve heard time and time again that complex, compound movements (e.g., squats and deadlifts, another reason why we love squats and deadlifts!) are great libido boosters.

I’m not saying it’s for everybody, but at least give it a try, so you can see what I mean with this empowering feeling you get when you go toe to toe with these weights. Try spending less time on the treadmills and ellipticals and get out of the group fitness classes for a change. There is nothing wrong with these things, I just want you to see that lifting weights can be fun, challenging, and it can shape your body the way you want it. But, realistically, the group fitness rooms and cardio machines are always full. Another reason for this is because of the intimidation factor. Weight training is very intimidating to some people, especially beginners. I can agree here because there’s always your typical power lifter, body builder, endurance athlete, or just regular “staying fit” person. The one thing they all have in common is that despite their seemingly tough nature, they’re also among the nicest, most gracious people you’ll ever meet.  They’re usually happy to give you a spot, let you “work in” between sets, clear the floor for you when they see you doing walking barbell lunges, and some of them even cheer you on! Instead of being intimidated and looking at it in a negative way, look at the big picture behind it all, which is getting that sexy body and be positive!

Hormones play a role in the development of absolute strength in men and women, but the exact influence is not clear. The androgens that come from the adrenal glands and ovaries are the hormones most likely to influence strength. The most important androgens for strength development are testosterone and androstenedione. The absolute androstenedione response to weight lifting is similar in females and males.

Though women on average have about one tenth the testosterone of men, the level of testosterone varies greatly among women and influences women’s strength development more than is typical in men. Women who have higher testosterone levels may have a greater potential for strength and power development than other women. An individual woman’s testosterone level fluctuates, so a woman who is near the upper limit of her testosterone threshold may have an advantage in developing strength compared with other women. Also, Men average about 39 to 48 lbs more lean body mass and 6 to 13 lbs less fat than women. Men typically have a taller, wider frame that supports more muscle, as well as broader shoulders that provide a greater leverage advantage.

So, this is why you must not believe all of those portrayals and stereotypes when it comes to strength training. Most people don’t know the accurate information behind it and just automatically assume that woman who weight train will become masculine like men.

Here are the positive side effects to strength training and why woman should consider it:

To wrap all this up, I hope I’ve encouraged you to step off those cardio machines and get out of those group fitness classes for a change. Strength training in my opinion is truly the best form of exercise and I really think that it benefits people in so many ways. If we could just get past the stereotypes, portrayals, inaccurate information and culture of being strong is considered masculine, we would all reap these incredible benefits of strength training. I also wanted to add, since I’m a huge advocate of strength training and if I’ve persuaded you, then remember when you step foot into that weight room, don’t be intimidated and literally train like a man! Consequently, women should strength train in the same ways as men, using the same program design, exercises, intensities, and volumes, relative to their body size and level of strength, so they can achieve the maximum physiologic and psychological benefits. Don’t be afraid to weight train, all there are is positive benefits ahead of you and keep in mind you’ll thank me later when you put on that sexy bikini and cocktail dress!