Have you heard the breaking news about people’s glutes plateauing and not growing? Well, word on the street and from the media is they are known as the “Top 5 Glute Killers”. Reports say that they are going around destroying people’s glutes and restricting further muscle growth and strength in today’s modern era? We have heard certain reports saying the investigation is top secret and the authorities have no clue whether it’s one person or multiple people committing these glute crimes. All we know is that these criminals have been leaving messages saying “Glute killers are on the rise, glute hypertrophy will not be allowed and we will not be stopped, MUHAHAHA!”

Not many people seem to be doing anything about these glute killers, so we will have to take matters in our own hands. We will solve these crimes ourselves and be known as the “Glute Slayers!” Along this investigation we will have the help of the one and only Bret Contreras aka “The Glute Guy.”

In this investigation we will be using some of The Glute Guy’s awesome articles, research, and of course good ole anecdotal evidence to catch these monsters. We promise we will find these “Top 5 Glute Killers” and put them to rest at once.  Each glute killer will be exposed for their crime and will be sentenced with a solution, so they can never harm one’s glutes again…Get ready!

Glute Killer #1: Too Much Sitting!

Crime: Recently we just caught our first suspect. This criminal has confessed to us that he has been advising people to sit around all day long. We asked the suspect why they would do such a thing to one’s glutes. The suspect replied, “I want more and more people to live a sedentary lifestyle with no exercise, that way by them sitting all day they will accumulate chronic back pain, tight hip flexors, and tight hamstring muscles. I want to create more inhibitory consequences to excessive sitting, as compression slows down vascular function and interferes with nerve function.”

Sentence/Solution: Try your best to get up as much as possible and move around. We understand people have to work desk jobs for 8 hours. But this doesn’t mean you shouldn’t get up from time to time to stretch, walk, and keep your blood flowing in your body. Try getting up every 1-2 hours to walk for 5-10 minutes, do some dynamic stretches, do some body weight glute bridges, practice your hip hinge, use the stairs when going places. Main point is to keep your glutes firing throughout the day.

Crime: When we caught the next glute killer, the suspect had a little more sympathy than glute killer #1. But the suspect still confessed to causing glute imbalances in harmless people’s glutes, so we still had to nail him. Glute killer #2 said “there are 3 main causes of Gluteal Imbalances,” he heard this from a man by the name of Bret Contreras, we didn’t believe the suspects allegations but we still let him state his 3 main causes:

1.)    Asymmetrical Human-Nature: By nature, we are asymmetrical beings; our anatomy itself can be asymmetrical. Therefore, it comes as no surprise then that one glute or region of the glute might be stronger and more coordinated than the other (1).

2.)    Inactivity: When considering the human body, we know that some muscles are more prone to inhibition than others, and the glutes are one of these “easily-inhibited” muscles. Neural and mechanical inhibition involving opposing muscles can interfere with gluteal activation, and therefore could shut them down. Gluteal inhibition can negatively impact posture, and poor posture can further inhibit glutes, thereby creating a downward spiral in gluteal function. Probably the biggest reason why the glutes shut down is due to inactivity (1).

3.)    Pain, Prior Injury, and Structural Issues: Pain is a huge inhibitor of the gluteus maximus, which is a pretty big deal at the end of the day. Research shows that glutes can become inhibited with just about any lower body or spinal injury. The glutes are major propulsion muscles. They produce powerful locomotion. Inhibiting the glutes will cause an individual to slow down so they can heal. The problem is that the glutes don’t necessarily turn back on automatically. They must be reactivated, restrengthened, and recoordinated back into every day movement and activity. Following injury, most people continue to keep working out, and their movement patterns suffer and other muscles will then compensate for others (1).

Sentence/Solution: This suspect was being very hard headed when we asked him for a solution to Gluteal Imbalances. He pretty much said you have to read this blog on how to correct Gluteal Imbalances or else they cannot be fixed.

Crime: Luckily Glute Killer #2 made our investigation a bit easier and turned in the next glute killer on our list. When we found out who this was, we were not surprised. This is a very common mistake many people make and it doesn’t help when you have criminals like our glute suspect showing you the wrong way to activate your glutes. For those that are not familiar with the term “glute activation,” it’s just a fancy way of saying warming up your glute muscles properly. So we asked this suspect why he had been showing people the wrong way to warm up their glutes. The suspects reply was “glute activation is not important in my book, when people don’t activate their glutes properly they have a higher probability of getting injured and not gaining strength and muscle MUAHAHA!” This was quite a disturbing answer by the suspect but we found a solution.

Sentence/Solution: Incorporate various glute exercises in your dynamic warm-ups for 15-20 minutes prior to a lower body session. Mainly glute exercises that target the glute medius, minimus, maximus, and even your TFL. These are all extremely critical muscles to activate and are often over looked. Some examples are Monster and Sumo Walks with resistance bands, X-band walks, Glute Bridges, and a ton more. For more glute activation solutions read here. Always remember your glutes are the steering wheel to your lower body, they deserve a proper warm-up.

Crime: After Glute Killer #3 testified, in order to reduce his sentence he was willing to give up our next suspect on our list. We caught him red handed in a big box commercial gym, we definitely thought he was smarter than this. We wanted to know his reasoning for not having people work their glute muscles directly. The suspect said “there is no need for direct glute work; all you need to do is squats, deadlifts, a little Zumba, and the Brazilian butt lift videos.”  While we wanted to chuckle at his answer, we knew this was a serious matter and this is a very common mistake many make when it comes to resistance training. While squats and deadlifts are awesome and do help build the booties, but at the end of the day it’s not enough direct work to the glute muscles to increase hypertrophy.

Sentence/Solution: Do not take Squats, Deadlifts, Step-Ups, Good Mornings and, Lunges out of your routine. These are your vertical loading exercises. Simply add in other superior glute exercises such as the famous Hip Thrusts, American Hip Thrusts, American Deadlifts, Glute Bridges, Back Extensions, and Reverse Hypers. These are all considered horizontal loading exercises (2). Also, one must not overlook the importance of mechanical tension, metabolic stress, and muscle damage to promote hypertrophy in a muscle. Brad Shoenfeld says “hypertrophic benefits associated with eccentric exercise may be due to a greater imposed mechanical stress compared with concentric or isometric actions. Indeed, muscles are capable of generating greater absolute force when contracting eccentrically vs. concentrically. Despite this fact, however, muscle activation during maximal eccentric actions is generally less compared with those performed concentrically (4). So try and use different methods of resistance training: eccentric, concentric, or isometric when training the glutes. You never know which method your glutes are going to respond to best.

Crime: To wrap up this grueling investigation we caught our last suspect. Needless to say, this suspect was very easy to find. The suspect was relatively easy to find do to the disuse and inactivity of the glute muscles in general. There really was no reason to ask this suspect any questions, it was plain and simple that the suspect was trying to get people not to use their glutes overall.

Wrapping up this very intense investigation, we are pleased to say we caught all of the “Top 5 Glute Killers” that were going around harming people’s glutes. We would like to give a huge thanks to “The Glute Guy” for helping us out with this one, not quite sure we could’ve done this on our own. The mayor of our city has presented us with the key to the city for our duties. We are now known as the “Glute Slayers” around town. All we ask is that we hope you put all of the solutions to use from now on. These solutions are great tools and will only benefit your training and help you achieve the goals you are after. Until more glute killers break loose, we leave you with this, “If you don’t use your glutes you will lose them.” 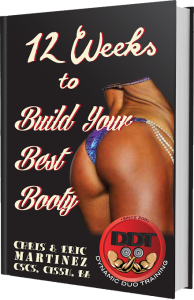