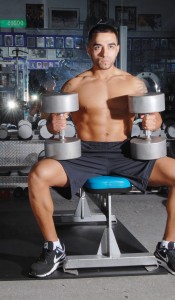 Not consuming protein is almost as bad as committing a crime. Think of it as robbing a bank that has no money. All that effort planning the robbery and committing it and you don’t even get a penny out of it. Now let’s use this analogy towards not consuming protein. You are robbing your body of the many benefits protein has to offer. All of the hard exercise is gone to waste if you aren’t consuming an optimal amount of protein. Let’s say you aren’t exercising, you’re still robbing your body of all the benefits protein has to offer. In this article I will be discussing the dynamism of protein and how this can be a huge game changer for you, the training population, or sedentary (couch potato) population.

What’s so dynamic about protein you ask? Well, when an individual consumes a meal high in quality protein it ends up being energetically costly. Your body has to use more energy and work twice as hard to assimilate this macronutrient. The energy cost of digesting, absorbing, and metabolizing proteins (23%) is greater than that of either carbohydrates (6%) or fat (3%) (1). (2) When you eat a high protein meal, it is so powerful that you activate muscle protein synthesis (percentage of muscle tissue protein renewed each day) from leucine content. The other thing that happens is when muscle protein synthesis (MPS) is activated, it is so powerful that it depletes ATP (quick burst of energy) and after a few hours into the MPS phase you activate AMP kinase to make more ATP available because MPS is so powerful. That depletion of ATP from MPS (from protein ingestion) is going to cause significant body compositional changes.

Why activate AMP kinase? Activating AMP kinase is very important because once ATP is depleted; AMP kinase comes in and initiates a signaling cascade that makes more ATP available. Having more ATP available means an increase in your muscle’s oxidative capacity, your muscles have these energy producing units called mitochondria  and this is where ATP are made and fats are burned. The more mitochondria you have and the more active they are the greater oxidative capacity you have for fat loss. So, in a perfect world, we want AMP kinase activated to initiate a signaling cascade to produce more ATP so our bodies can become more efficient at burning fat.

Leucine is the light switch for MPS. (3) MPS is the way you synthesize new muscle in muscle. There’s 10’s & thousands of different kinds of proteins you synthesize in muscle. Specifically in muscle tissue where your turning over myofibril & fibrous proteins by increasing MPS. You’re going to increase the amount of muscle that you’re gaining. Over amounts of time you want elevated levels of MPS.

The best way to get elevated levels of MPS is through the essential amino acid (EAA) “Leucine.” You can only get EAA’s through diet or supplementation, your body does not produce these amino acids. There have been countless studies showing that leucine is the key stimulator for MPS. Think of jumper cables transferring current from one battery to another, leucine is responsible for jump starting MPS. So when you hear people saying that it doesn’t matter what kind of protein you eat, as long as it’s a clean protein. Well the quality actually does matter and the type of protein you consume makes a difference and I’ll discuss this more in the latter part of this article. You’re better off eating animal sources because of the high leucine content. Leucine is actually a strong indicator of the quality of the protein you’re consuming as it relates to its ability to raise muscle anabolism. When you raise muscle anabolism, your body is in a great position to induce muscle tissue. The more muscle tissue one has, the higher their metabolic rate is going to be and this will lead to fat loss. (4) A study by Acheson et al. shows that different protein sources can be used to modulate metabolism and subsequently energy balance.

The reason they lost more fat in the whey protein meal was because of the high leucine content and that activated MPS in the subjects and was more energetically costly. This is a prime example of why consuming different types of proteins matter. Leucine drives MPS and has a signaling effect. Leucine threshold is 2-3g to maximize MPS (5). So you really want to consume proteins high in leucine such as: Beef, chicken, eggs, pork, fish, whey, casein, and milk. Depending on the amount your consuming from these proteins will get you over the leucine threshold and activate MPS. But it seems as if whey protein is going to elicit a greater thermic response than does protein composed of either casein or soy. But let’s not get this twisted, if for some reason your body can’t tolerate whey, then the research shows that soy and casein still have a thermic effect.

(6) A study published in the Journal of American Medical Association showed that a higher protein diet contributed to the changes in energy expenditure (Think metabolic rate) and lean body mass.

Twenty-five healthy, weight stable males and females aged 18-35 years were randomized to diets containing 5% energy from protein (low protein), 15% (normal protein), or 25% (high protein), which they were overfed during the last 8 weeks of their 10-12 week stay in the in-patient unit. The results showed that the normal and higher protein diets contributed to changes in energy expenditure and lean body mass. The interesting part to this diet was the low protein group gained the least amount of weight during the overeating period and this was due to no increase in lean body mass. They also stored 90% of the extra calories as fat and this was because they didn’t gain muscle. Lean body mass improved in the normal and high protein group and improved energy expenditure and only about 50% of the extra calories were stored as fat. So this is just another reason that goes to show you that when you consume a meal high in protein, it is energetically costly and will stimulate MPS and when MPS is stimulated it can increase lean body mass and decrease excess fat gain. The bright side to this is even a sedentary person can start adding protein to their diets and get some of these benefits. (7) In another study by Loenneke et al. found that quality and distribution of protein may play an important role in regulating central abdominal fat. The quality and distribution of protein are of particular interest to those who are energy restricted, who might benefit from the consumption of a higher quality protein source (e.g. Milk, beef, egg), resulting in a higher essential amino acid content per gram of protein. Neither carbohydrate nor dietary fat intake was associated with percent central abdominal fat, which highlights the importance of protein intake.

Again, this shows that the quality of protein does matter because the protein sources were high in leucine and it stimulated MPS and it decreased central abdominal fat through increased resting metabolic rate from increased lean mass. Eating a high quality protein source can play a huge role in regulating central abdominal fat, which is a strong independent marker for disease and mortality.

The Bottom line: Hopefully now you can see the dynamism of consuming protein and why negating protein is like committing a crime. Your body has to use more energy and work twice as hard to assimilate this macronutrient as opposed to carbohydrates and fats. You absolutely want your body to have to work hard when digesting, absorbing, and metabolizing proteins. The activation of MPS is so crucial when it comes to increasing lean mass or decreasing fat. It would be foolish to overlook the energetically costly process of protein consumption because on a low-protein diet, the body has to get protein from somewhere else and it gets it from lean body mass. Losing lean body mass is never a good thing.  So, as you can see above with the research studies, what they all have in common is with a high quality protein diet, the subject’s metabolisms are stimulated and this changed their body composition through muscle gain and fat loss. So, the big picture is to make sure to add in higher quality proteins to your diet (e.g. Beef, chicken, eggs, pork, fish, whey, casein, and milk) and reap the dynamic benefits they have to offer, whether you are an athlete or couch potato.  If you still don’t take in higher quality proteins after all this, then go rob a bank with no money in it! Peace