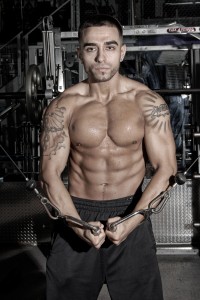 Now I’m sure a lot of you have heard this old saying when it comes to working out and training, “NO PAIN, NO GAIN!” I wonder how many of you believe in this saying because I remember when I used to tell people, “if you aren’t sore after hitting the weights, then you simply didn’t hit it hard enough” or “I’m telling you, you have to feel the soreness in your muscles after training, this will tell you that you had a good workout and means you’re going to grow.” These were the exact words that were coming out of my mouth to people. All I can say is shame on me for this and that I’m human and I make mistakes just like everybody else. Lately, I’ve been researching muscle damage and hypertrophy (growth). There was one study I recently came across and it really hit home. It was a study from The Journal of Experimental Biology and found that you don’t have to be sore after a workout in order to get your muscles to grow. Wow do I feel better after finding this study. So, in this article I will explain how muscles hypertrophy, how weight lifting damages muscle tissue, the study conducted, what the results were, and how this can be applied into your workouts and training methods. If your arms are too sore to even move the mouse to read this, then I’m going to become your new best friend!

How in the heck do our muscles grow? Let’s start off with the word muscle hypertrophy (Hi-pert-row-fee) first. When you hear this word, just think of it as a fancy scientific term for an increase or growth in muscle size. Muscles are overloaded and stimulated to grow when they are trained with weights that are heavier than the body is used to handling. The way a muscle grows is by increasing its rate of protein synthesis. By increasing the rate of protein synthesis, the muscle makes new contractile proteins and incorporates them into the muscle tissue to make it stronger and larger over time. The muscles need nutrients (protein, carbohydrates, fats, and vitamins) and recuperation time to grow bigger and stronger over time. But, please keep in mind, this was just a simple synopsis on muscle hypertrophy and though easily defined, it is an intriguing and complex adaptive process.

Weightlifting damages muscle tissue. I’m sure you freaked out when you heard the word damaged. But, it’s a good kind of damage. You see, when you lift weights, your muscle tissue is actually broken down (atrophied) or in this case damaged. There are several aspects on hypertrophy, but I feel that the stretch placed on the muscle tissue (think of the full stretch when the weight is going down on a preacher curl) and the tension (think of how long the muscle is burning while going down in that stretch) are two of the more important aspects for hypertrophy. Back to muscle damage being a good thing because when you rest and recover properly, amino acids are then synthesize to create new muscle tissue thus allowing the body to enlarge the muscle to be bigger and stronger and better able to handle the same overload, or heavier overload in the future (hint: This is why we need protein after a workout). So, when you hear the word muscle damage, it just means that you stimulated the muscle tissue in a good way through overload (strength/resistance training).

Muscle hypertrophy is possible in the absence of symptoms of damage. A study conducted by Flan et al in The Journal of Experimental Biology found that you don’t have to experience muscle soreness in order to get a hypertrophic response. In this study, fourteen healthy university students (8 males and 6 females), were divided into two groups with a structure that equalized age, sex, height, body mass, and strength of the quadriceps. The two groups consisted of pre-trained (PT) and naïve (NA) and both groups comprised of three women and four men. All training was performed on a recumbent bike, high-force, eccentric leg cycle ergometer. Now, they chose the recumbent bike because the motor drives the pedals in a ‘backwards’ direction (towards the person) and the person has to resist this motion by pushing on the pedals as they move towards them. What this signifies is because of the pedals moving towards the person, the person has to apply resistance and this results in lengthening contractions of the knee and hip extensors, including the quadriceps muscle (just try and picture this, you would definitely feel the muscle stimulation in your quads as you’re trying to push against the pedals from coming at you). So what this experiment looked like was they had the PT group experience three weeks worth of the recumbent bike exercise and then they brought in the NA group. So the PT group had a three week head start, gradually building their strength up and they hypothesized that by bringing in the NA group, they would experience muscle soreness and muscle damage. They figured their muscles have not experienced any overload in three weeks, nor have they even had a chance to gradually increase the load. But they went ahead and started the NA group on the same load as the PT group and resumed the 8 and 11 week study (8 weeks for the NA group and 11 for the PT group).

What were the results you ask? The two groups experienced significantly different levels of muscle damage. There was no muscle damage in the PT group and there was some slight muscle damage in the NA group, mostly in weeks 4-7 and that’s probably because their muscle, joints, etc. had to get accustomed to the routine and the PT group had a three week head start. Both muscle size (in the quadriceps) and strength increased equally in both subjects. Overall, the total work effort expended over the 11-week training session was identical for both groups. By contrast, muscle damage was statistically different between the groups. With NA group showing detrimental symptoms of muscle damage and soreness, whereas the PT group experienced no symptoms of either damage or soreness. Independent of levels of initial damage, the changes in muscle size, growth factor levels and quadriceps strength were the same.

How can we apply this in a real world setting, like your training regimen you ask? Since we now know that muscle hypertrophy can occur independent of any symptoms of muscle damage. This study showed in both groups, the high forces (heavy resistances) produced by lengthening and eccentric contractions provided a powerful stimulus to promote muscle growth and strength. Also, there have been quite a bit of studies conducted besides this one and have proven similar results. So, while still thinking that we have to come up with a workout routine that is going to leave us dead sore in order to build muscle is ridiculous. In fact, it could be counterproductive. More does not necessarily mean better. Being sore is not an accurate measurement of how good your workout was or doesn’t mean you’re going to grow more muscle. Being sore has many complicated variables to it that I won’t get into here. Now in no way am I saying not to work out or train hard, that’s not what I’m saying at all. I’m a huge advocate in training hard, but there’s a difference between being smart about it and not being smart about it. Big picture, don’t worry so much about going into the gym and thinking more is better and that you absolutely have to destroy a body part during a workout in order for it to grow. If you’re sore after so be it, if you’re not sore, oh well, doesn’t mean that workout was wasted and that you’re not going to get that hypertrophic response. Stick to your training routine, workout hard, be smart, rest, be consistent, and always have your nutrition on point.  “NO PAIN, NO GAIN” is gone, adios, ba-bye! Peace!