Do you set your alarm clock an hour before your supposed to wake up, drag yourself out of bed, skip breakfast, and hop on the cardio machine in hopes of elevating your fat burning capacity? If so, hit the snooze button and get some more shut eye.

The truth is, performing cardio on an empty stomach does little to increase fat burning over doing cardio in the fed state. Performing cardio on an empty stomach aka fasted cardio is a common fat burning strategy employed by bodybuilders, athletes, and fitness enthusiasts, it simply doesn’t hold up. The theory behind this strategy is to perform cardiovascular exercise early in the morning on an empty stomach (fasted) to get a shift in energy utilization away from carbohydrates entering the blood stream, therefore allowing greater mobilization of stored fat for fuel. But there are some scientific reasons that this strategy just doesn’t hold up and we’re about to tell you why.

Finally! We can put this fasted cardio vs. fed cardio debate in a wooden box, nail it shut, and burry it. There was an article in the February Strength & Conditioning Journal that was written by Brad Schoenfeld, MSC, CSCS. This article reviewed the effectiveness of fasted cardio and there were some great take a ways as to why fasted cardio isn’t the most optimal route to go for fat burning purposes.

There are Two Parts to Burning Fat:

1)  The first part to burning fat is we must understand that all of our organs in our body store fat. We store fat in muscle, heart, lungs, intestines, but the fat that makes us look fat, that’s underneath our skin is called ‘subcutaneous adipose tissue.’ To burn fat from adipose tissue, we first have to liberate it. It’s liberated by freed up fatty acids (triglycerides) that are inside fat cells and then dumped into the bloodstream. This process is called ‘lipolysis.’ An example of lipolysis would be the minute you start pedaling that stationary bike or the minute you start running on that treadmill. Immediately your body starts releasing triglycerides out of your fat cells to be used.

2) The second part to burning fat is after the fatty acids are dumped into the blood stream (lipolysis), they are delivered to different tissues like the heart, liver, and muscles where they are being oxidized (burned). Think putting gas in you car and the fuel being burned.

So, those are the 2 parts to burning fat. We first have the lipolysis process and then we have the oxidation process. We need both processes in order to burn fat. Most fat is not oxidized in adipose tissue, very little; it is in other tissues, so we need that delivery.

This means the oxidation process is either the same or better if you eat before cardio. This study found that the actual rate limiting step of fat loss isn’t any different or could be better. The reason why it could be better is because studies have shown a greater thermogenic (body causing heat) response to exercise when you eat before hand.

Another study by Paoli et al. took one group, they consumed 673 calories pre workout. Researchers compared oxygen consumption and substrate utilization both during almost forty minutes of treadmill work and twenty four hours thereafter. The results showed not only was oxygen consumption higher, meaning more work was done and more calories used, but a higher percent of triglycerides were used as energy throughout the entire day due to a higher resting metabolism. You will burn more overall calories throughout the day than if you had performed fasted cardio and you’ll have more energy doing it and thus work harder at it.

In the end, studies have shown there are really no differences in fat loss, whether it be fasted or after a meal. People get too focused on the substrates to burning fat. They think we have to be glycogen (stored carbs in liver and muscles) depleted because we don’t want to burn carbs, just fat. But, it doesn’t really matter because over a 24 hour period, there’s no difference. You burn more fat during cardio; you burn more carbs during the day. You burn more carbs during cardio; you burn more fat during the day. Your body makes these adjustments and this is something people don’t really understand. What matters most is how much actual body fat you’re losing over the course of a week, months, etc.

But there’s still those people that can’t get away from this dogma and trends and refuse to try new things.

Reasons Why Fed Cardio is Better than Fasted Cardio:

1)  Insulin sensitivity is higher pre workout- You become more sensitized and are better able to utilize carbs during cardio.

2) More fuel in the tank- When you have a nice protein and carb meal in you, your body will have more energy and will make you train harder during that cardio workout, thus leading to more calories burned. How are you going to have energy being fasted?

3) Muscle preservation- Another study showed that by doing fasted cardio, you could lose twice the amount of nitrogen as opposed to eating. This puts you at risk for muscle loss.

We are aware that there are people that have been doing fasted cardio for years and getting great results and that’s perfectly fine. But as we stated above and the scientific data is clear that lipolysis is not the rate limiting step of fat burning, it’s the oxidation process. So why not try something new and have some food before your cardio session. It could be something with golden benefits and results, perhaps more fat loss? But, then again, there’s still those people that can’t get away from these dogmas in the fitness industry. It’s nailed into their heads. People are scared to try new things. In that case, we guess all we can say is keep doing what you’re doing then. But, for those of you that like ‘change,’ we hope we’ve informed you about fasted vs. fed cardio and let us know which type works better?

GRAB YOUR COPY OF OUR ULTIMATE HIIT CARDIO GUIDE 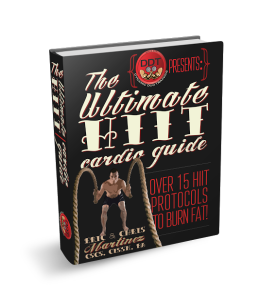